Welcome to my website which tells you who I am and what work I do.

I am a broadcaster, host and producer who loves sport.

Sport is strong in my family – mainly because of my family surname (Brendon Batson OBE) and upbringing. But my passion goes much further than watching or playing.

As well as courtside reporting & commentating for the LTA, I provide WTA tennis match commentary live streamed on Prime Sport and BBC Sport.

Another string to my bow is hosting live events including the Club Wembley: Bobby Moore room at Wembley Stadium for Finals and England matches. Role involves interviewing football legends live on stage in front of a Club Wembley audience. I’d describe my style as engaging, informal and relaxed.

I appear as a podcast guest for the Guardian Football Weekly, BT Sport Football Writers, Offside Rule WSL edition and others.

Founded by me, the platform focuses on my media entities with sport at the heart of it:  broadcasting, producing, hosting and other new media connecting directly to the audience (exciting!).

I adore audio, live TV and streaming – absolutely love it. I understand what different audiences and platforms demand. I’m developing projects as a producer too.

I believe strongly in anti-racism and sports equality, supporting organisations such as Kick it Out. I believe in using my platform to speak out about this issue.

I’d love to share my journey as a broadcaster, host and producer by speaking at your conferences, events and panels.

Recognised on the “Football Black List” supported by the Premier League and The Voice newspaper for services to football in 2019. 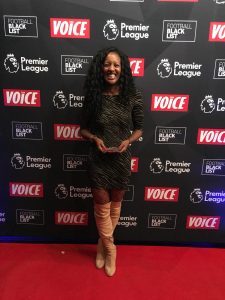